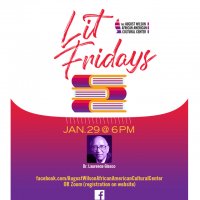 Lit Fridays is a literary-focused, virtual salon presented by the August Wilson African American Cultural Center, featuring conversations and guest performances on the last Friday of each month at 6:00p EST via Facebook Live and Zoom Webinar. All conversations are moderated by AWAACC Literary Curator, Jessica Lanay.

Laurence Glasco is Associate Professor of History at the University of Pittsburgh. He was born in 1940 in Xenia, Ohio, located near Wilberforce University. In 1962 he received a BA degree from Antioch College and in 1973 a Ph.D. in History from the State University of New York at Buffalo. His master's thesis described the racial philosophy of the Mexican philosopher, Jose Vasconcelos, and his dissertation examined the ethnic social structure of Buffalo in the mid-19th century. Since coming to the University of Pittsburgh's History Department in 1969, he has focused on African American history, both locally and globally.

Professor Glasco has studied the history of Black Pittsburgh for the past decade or so. He researched and narrated the recent exhibition on slavery in early Pittsburgh, "Free at Last?," which is available on-line at http://www.library.pitt.edu/freeatlast.

His principal publications on the history of Black Pittsburgh include August Wilson: Pittsburgh Places in His Life and Plays (2011, with Chris Rawson), "Teenie Harris: A Biography," in Teenie Harris, Photographer: Image, Memory, History (2011), The W.P.A. History of the Negro in Pittsburgh (2004), "Free at Last?" opening essay in the catalog for the exhibition on slavery in Pittsburgh at the Heinz History Center (2008); "Three Rivers Youth," opening essay for the

Glasco completed the research for a documentary film, "Barrier Breakers: Jesse Owens and the 1936 Berlin Olympics," which will be shown at the 2016 Olympics in Brazil, on the occasion of the 80th anniversary of the Berlin Olympics.

Glasco's activities in Pittsburgh's African American community go beyond teaching and research. For his community work, he received several awards in 2009, notably the Pittsburgh Courier's "Men of Excellence" award and the YWCA's "Racial Justice Award," and "Talk" magazine's "Black History Merit Award." In 2010 he received the Chancellor's Distinguished Service Award.

Glasco also served on the advisory committee to restore the New Granada Theater in the Hill, delivered a lecture at the Economic Mini-Summit on Black Empowerment and spoke at the opening ceremonies of the K. Leroy Irvis Science Center at CCAC. In addition, he appeared on KQV radio and WQED regarding the Civil Rights movement in Pittsburgh.

He works toward preservation of historic Black sites in Pittsburgh as a member of the Board of Trustees of the Pittsburgh History and Landmarks Foundation and a member of Young Preservationists Association.

Several round-the-world voyages with the Semester at Sea program, and regular visits to Cuba, have helped me place the story of Black Pittsburgh in global perspective.