How the Hill District LERTA Happened! 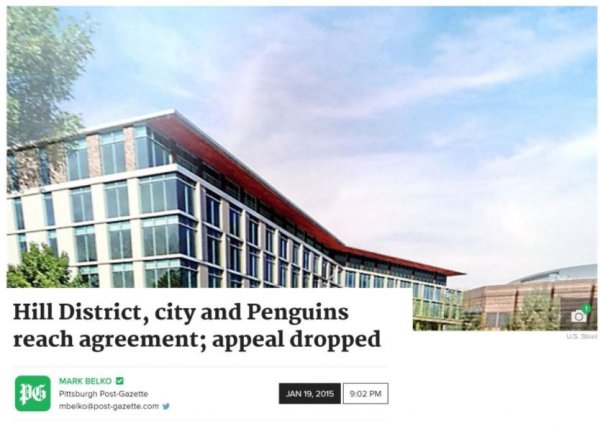 The Hill Community Development Corporation (Hill CDC) reached a settlement agreement following its historic legal action against the NHL's Pittsburgh Penguins and the City of Pittsburgh regarding an initial proposed development for the Lower Hill District site. The Hill CDC filed the suit after having organized the Hill District community over many months while also negotiating community benefits with the Lower Hill District Working Group. The collective effort was focused on community benefits that should result from the redevelopment of the historic 28 acre urban core site.

When the City of Pittsburgh Planning Commission failed to formally adopt the community benefits agreement as a part of the developer's Lower Hill regulatory plan, the Hill CDC independently filed an appeal in the Court of Common Pleas to safeguard benefits for the Hill District and its residents. What resulted was historic. The establishment of what was then the largest tax increment finance district in the history of the City of Pittsburgh (LERTA), the establishment of a Citywide Affordable Housing Taskforce, and a compliance monitor to assure the implementation of the negotiated community benefits agreement entitled the "Community Collaboration and Implementation Plan" (CCIP).

The Citywide Affordable Housing Taskforce was the basis for the establishment of the City of Pittsburgh's Housing Opportunity Fund (HOF) which funds $10 million in affordable housing needs annually. The fund is housed at the Urban Redevelopment Authority (URA).

The Local Economic Revitalization Tax Assistance program (LERTA) will generate over $40 million in tax dollars to support Middle and Upper Hill District projects, organizations and resident-needs. The Hill CDC with Hill District organizations will serve in a leadership capacity to determine the distribution of these funds. The funds will be housed at the Urban Redevelopment Authority, and distributed only as indicated by the community advisory board. (Note: Another $40 million was supposed to be invested into Lower Hill infrastructure under the same control, however that portion will be retained by the developers in the latest changes to the Lower Hill Term Sheet in October/November 2019 by the URA and Sports and Exhibition Authority.)

The Community Collaboration and Implementation Plan is underway with biweekly meetings between the City, Hill CDC, Pittsburgh Penguins and committee appointees. Compliance is a core focus to assure that the Agreement advances the entire Hill District community including a broad range of social, cultural and economic opportunities and benefits.

Over the years, the Hill CDC has not only worked to assure equity and access for all Hill District residents, but the organization has taken great risks and bold stances to promote equitable policies city-wide. Victories we collectively claim today were once difficult, lonely, and unpopular positions. While all that we have achieved as an organization pales in comparison to what the late, great Dr. Martin Luther King Jr. achieved in his short life, we'd like to imagine that he would be proud that we are standing in faith and courage while pushing an agenda centered on social justice, human rights and equity. We are also certain that he would be as encouraged as we are that more than ever the Hill CDC, City of Pittsburgh and Pittsburgh Penguins are finding new ways to partner and collaborate. Or, perhaps he would simply remind us that "We are caught in an inescapable network of mutuality, tied in a single garment of destiny. Whatever affects one directly, affects all indirectly." - MLK Jr.

What Will the $40 Million Fund?

What Entities Make up the Advisory Board?

Individuals will be appointed to the Advisory Board by...

Councilman Lavelle and the Hill CDC, as Co-Chairs of the Fund, are committed to transparency and accountability. We will continue to keep you updated on how to apply and future meetings. Stay tuned for how to apply once the application is developed.