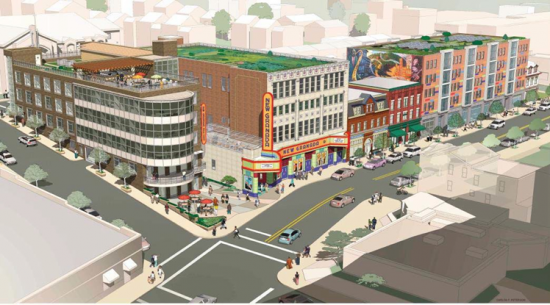 The New Granada Square is a mixed-use redevelopment of most of the city block that includes the historic New Granada Theater on Centre Avenue. Separate projects make up the development that includes apartments, cultural/performance space, commercial/retail spaces, and offices.

The New Granada Square Apartments is being co-developed by the Hill CDC and CHN Housing Partners to be 40 apartment units (24 apartments will be 1 bedroom and 16 apartments will be 2 bedrooms). The housing will be targeted for artists who have connections to the African-American community. The first floor will have five spaces that combine for a total of 5,000 sq. ft., and the largest of those is designed to accommodate a 1,500 sq. ft. restaurant.

The New Granada Theater and Offices have as an anchor tenant the University of Pittsburgh's Community Engagement Center. Located on the upper floor of the historic theater building, and connected to the upper floor of the new construction, this 20,000 SF space will allow Pitt to interact in a more impactful way with the Hill District residents. The second floor of the theater building will be restored as a flexible event hall that will easily accommodate over 900 attendees for performances, as well as a spectacular venue for weddings or corporate events. The first floor of the theater building will include both a food hall offering multiple cuisines and a community event space that may accommodate almost 100 people. The new construction to be built alongside the theater will have a full-service restaurant on the lower floor next to the public plaza and will have office space located above. Finally, and not least of all is a rooftop dining and viewing deck.