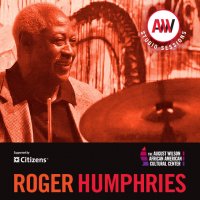 The new virtual series, AW Studio Sessions is an intimate music experience with the most talented musicians on the scene, LIVE in studio. These sessions will draw you in, and make you feel like you are sitting in, a part of the hang, so pour a beverage, sit back, enjoy the music with us the first Thursday of the month through April 2021.

Roger Humphries is a living legend, beginning his professional career in the 1960's backing up both tenor saxophonist Stanley Turrentine and organist Shirley Scott in a legendary trio. He joined the Horace Silver Quintet, laying down the rhythms on some of Silver's most popular albums, including the superb Song for My Father. Later he honed his big band chops working with Ray Charles. Humphries' career continued with a long list of jazzmen who found his drumming to their taste, including Lee Morgan, Grant Green, Billy Taylor, Lionel Hampton, Coleman Hawkins, Clark Terry, Joe Henderson, Dizzy Gillespie, Johnny Griffin, and many others.