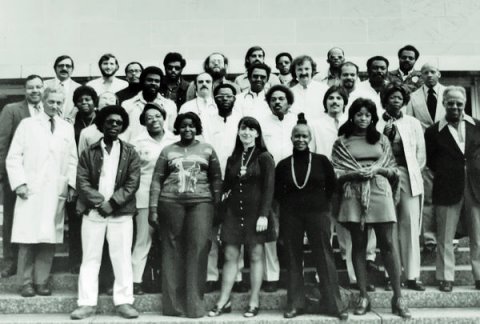 Credit Ben Spiegel courtesy of the University of Pittburgh

George McCrary knows the Hill District well. As he drives the windy streets, he points out the places he remembers from his days working as one of the nation's first emergency medical technicians in the late '60s and early '70s.

It was on these streets where a young McCrary was a member of the Freedom House Enterprise Ambulance Service, which served as the model for emergency ambulance medicine.

"Before Freedom House, when you called for emergency, you had two police officers and a paddy wagon with no provisions with no primary care, with no understanding of anatomy and physiology. Their main thing was to get you up and out the way," he said.

At the time, emergency medicine was either non-existent or bad. The federal government published a paper in 1966 saying a soldier wounded in Vietnam had a better chance of survival than his mother would have if she were in a car accident here.

In Pittsburgh, ambulances were privatized and didn't offer emergency care. They primarily served white suburbs or affluent parts of the city. No one was getting really great medical care - but in the mostly black Hill District, where the police transported people to hospitals, they weren't even getting the care the rest of the city was getting.

"No one would go to the Hill District in the same way taxicabs were hesitant to go there," said Phil Hallen, who ran the Falk Foundation.

The foundation's work focused on health disparities. He joined forces with Peter Safar, a renowned physician at Presbyterian Hospital who had helped develop CPR. Hallen knew Safar wanted to train laypeople to deliver care in emergency rooms on wheels.

"He was a man of considerable social conscience and in a sense it was a bonus for him," Hallen said. "I mean he could have trained anybody. But he saw the value of demonstrating this in a population of individuals who hadn't been thought of as having that kind of potential."

They recruited young black men off the streets. The men did rotations in the maternity ward, the ICU and the morgue. And then they were back on the streets.

"And they were performing services that previously would only have been done by a physician in a hospital," said Ryan Corbett Bell, author of the book "Ambulance: A History." "And now these guys, were now doing it in a sidewalk, in a sewer, in someone's living room, on their own. Completely independently. It was amazing,"

John Moon was one of those men.

"The Hill District and upper Oakland areas were economically deprived, poverty-stricken neighborhoods and here they were getting the very best possible care that you could get," he said.

The ambulance service was popular and functional for years. In the mid-70s the city decided ambulance services should become a municipal service, and Freedom House was disbanded. The men who had spent nearly a decade on the streets, such as Moon, weren't grandfathered in.

Hallen said racism was to blame.

"They had to suffer the indignity of not being recognized as the best-trained paramedics in the country. They said, if you want to work here, you have to go through training," he said. "Well, they could have done the training."

There's been a documentary made, their medical director authored a widely used textbook and they've received honors from the U.S. Department of Transportation, but Freedom House has mostly been forgotten. Hallen said that's a shame.

"This is a major stone in the Pittsburgh civil rights landscape in addition to being a breakthrough, cutting edge medical program," he said.

Moon went on to a high-level job with Pittsburgh EMS, from which he recently retired. As for George McCrary, he decided to go down other avenues.

"I didn't want to be around misery and illnesses and sicknesses any longer - know what I mean?" he said. "I did my tour."

But he likes being on the streets and talking to people. For the last three decades, he's been driving a cab.

Now that Pittsburgh's become a health care hub, McCrary will ask his fares if they're in the medical field. They often are. He tells them about his days with Freedom House.

And they're often surprised he's driving a cab and not delivering emergency medicine.

For more details go to: http://wesa.fm/post/how-hill-districts-freedom-house-emts-helped-shape-m...